Getting to Know My GRIT Freedom Chair

Editor's Note: GRIT is proud to bring you original content written by GRIT riders. Brad is an avid sports and nature photographer. He has been a paraplegic for 31 years and doesn't let that stop him from getting the perfect photo. He is proud to have achieved significant weight loss and has on-going fitness goals in the GRIT Freedom Chair.

Hi, my name is Brad Brown. I’m 52 and live in New Palestine, IN, which is on the east side of Indianapolis. I am paraplegic because of a car accident in 1986 at the age of 21. I was injured at the T-4 level which is from the mid-chest down.

I have been interested in the GRIT Freedom Chair for a few years, but I was not able to use one because of my weight. The chair is rated for a max weight of 300 pounds; I used to weigh over 300. I finally decided to do something, and in November of 2016, I had Bariatric surgery. Over the course of a year I lost 115 pounds and am now at the weight I want to be at. Exercise will be a key part of staying at this weight and the GRIT Freedom Chair will be a big help to me in this endeavor. 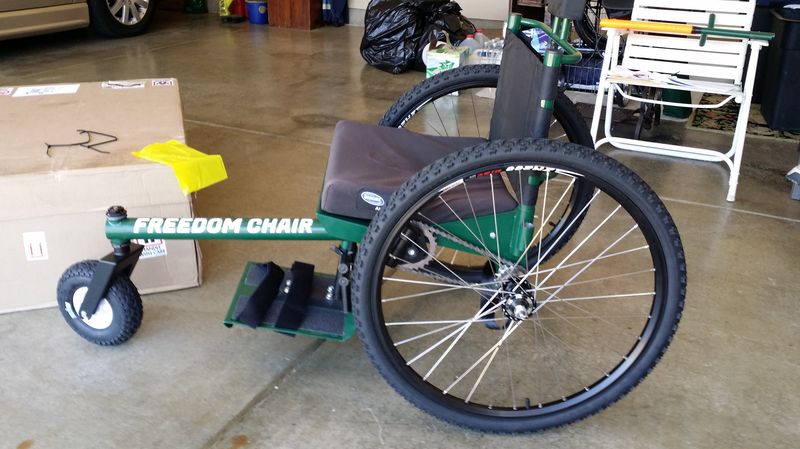 I ordered a GRIT Freedom Chair with a 20” seat and was told there would be a delay until that width became available. After a few weeks, I measured myself and emailed GRIT asking if an 18” seat might work for me. They were very helpful and gave me the chance to try an 18” seat. It turned out to be the right size, and I am glad I asked.

My chair was shipped and arrived a few days later. I unpacked and assembled the chair. The instructions were very easy to follow, and it took me about 45 minutes. Unfortunately, there was one small problem. The left side parking brake seemed to have a slight bend and after trying it a few times it snapped off in my hand. I called GRIT and spoke with Mario who was very helpful. He shipped a new parking brake to me with instructions on how to install it. The repair was easy and I was now in business. 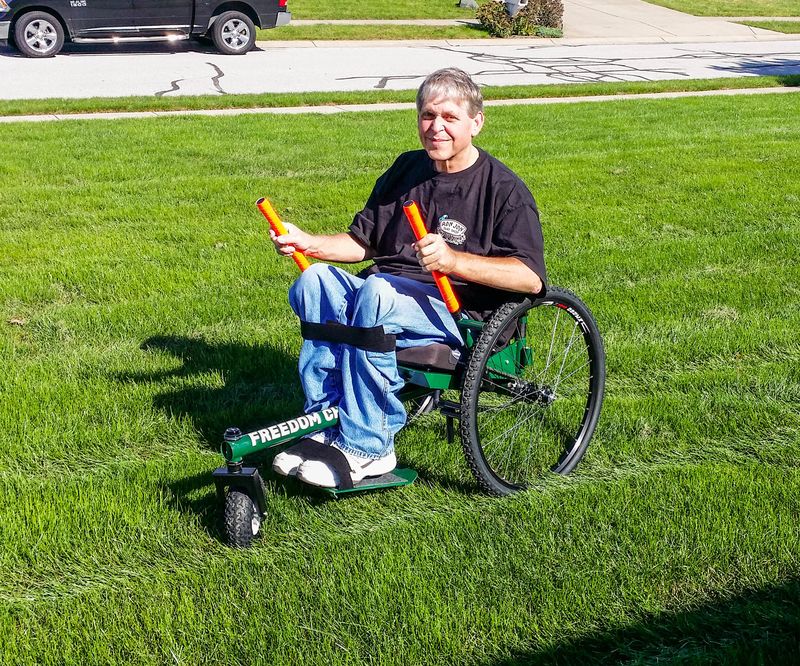 My first outing consisted of going up and down the driveway and out into my yard. The chair takes some getting used to, but I was pleasantly surprised at how easy it was to move through the grass under my own power. Later the same day I did a complete lap around my house in just a few minutes. I have used my everyday chair out in the yard, but it is much harder to get across the grass than the GRIT Freedom Chair is. I took my GRIT Freedom Chair around the block on the sidewalk. The chair has a tendency to steer itself toward the low side of the street and it takes a while to get used to the steering. You have to plan your turns beforehand.

The next step was figuring out how to load the GRIT Freedom Chair in my van. I drive a Chrysler Town & Country with a Braun Conversion. The driver seat rotates and I can pull up beside it and slide into it then turn around and drive. I was concerned that loading was going to be a problem. I was surprised to learn that I could push up the ramp using the levers of the GRIT Freedom Chair. I then had to remove the levers. The problem with this was that the chair was now facing the wrong way. Much to my surprise, I was able to turn the chair around. It is very, very tight quarters, but with moving the driver seat forward and maneuvering back and forth several times I got the chair turned and could then roll down the ramp using the levers as brakes. I tried this again wearing a pair of gloves and was then able to simply push down the ramp. I also found out that by wearing the gloves, I could turn the chair and back up the ramp by grabbing the spokes on the wheels and pushing backwards. This turned out to be the easier way for me so far. I was now ready to take the chair someplace outside my neighborhood.

My first trip was to the Pennsy Trail in Cumberland, IN. The trail is 3 miles of paved road that used to be a railroad. It has grass and trees on each side and is used by walkers, joggers, and people on bicycles. I have been on the trail and gone about a half mile each way so far. This has given me a chance to learn how to get the most power out of each stroke and judge the turning radius. I also took the chair off into the grass and have gone over different inclines. I look forward to going farther along the trail in the future. 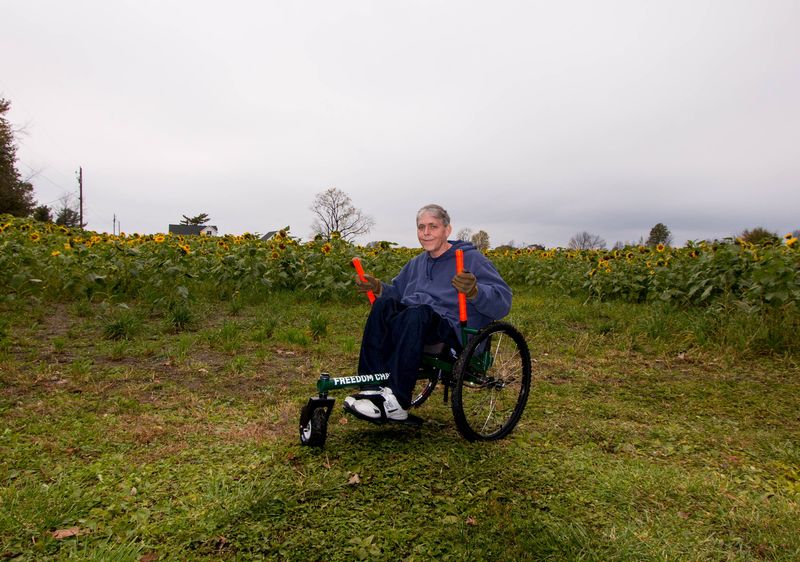 Moving Beyond the Pavement

I was now ready to take the GRIT Freedom Chair off the path. A local farmer just down the road from my neighborhood planted about 300 acres of sunflowers this fall. I am an amateur photographer and was naturally drawn to them, since they offered so many photo opportunities. I parked my van along the side of the field and made a trip under my own power into the farm field. The ground was uneven in places and had a thick covering of grass and stones. The GRIT Freedom Chair with its levers gave me the ability to move around and get close up to take photos. Carrying my camera gear, a tripod and cell phone was tricky, but I managed to make it work. I made several trips to the sunflower fields over two weeks. My chair was a muddy mess, but I loved every minute of it. It is really quite the workout for my shoulders. I am excited by all the possibilities this opens for me, and I look forward to sharing my adventures with you. Have fun and keep on rolling! 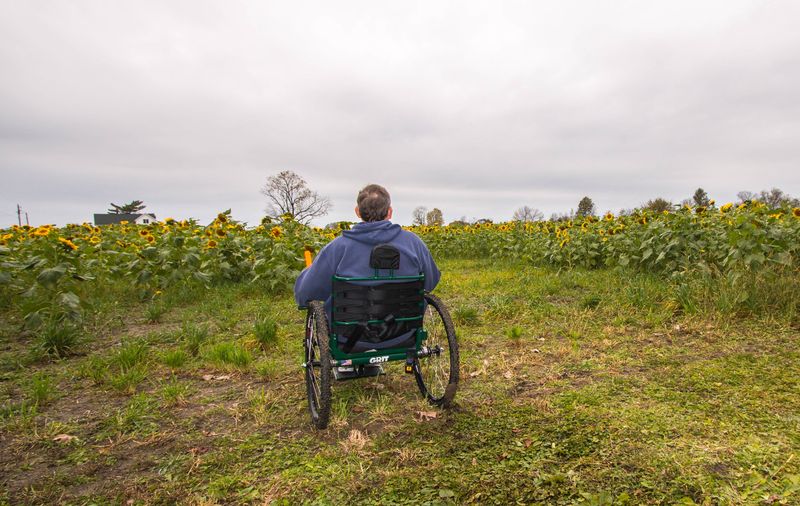 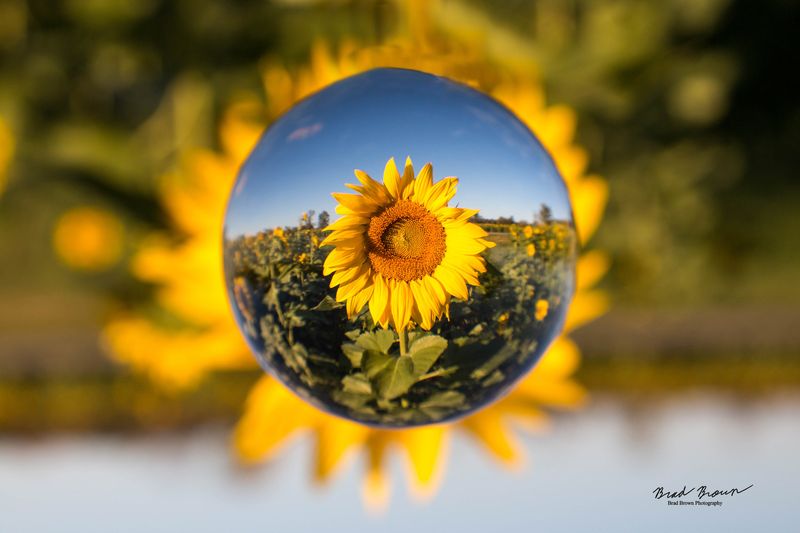