​The Overcoming of Suffering

We have always been drawn to stories of people that faced tragedy or extreme hardship and found fulfillment in their lives. Despite conditions beyond their control, they overcame overwhelming obstacles and pursued a joyous life. Life presented us with this challenge 15 years ago.

As children, we spent a lot of time outdoors. We are of the generation where we were "kicked outside" and not expected home until the street lights came on. Colleen loved the outdoors so much she earned her college degree in Biology. We met in 1995 during summer school. We had a strong connection from our first date, quickly fell in love, and married in 1997. During our free time, we enjoyed spending time outdoors hiking and biking. Our vacations often centered around trips to the mountains or the coast to enjoy the ocean.

In 2005, life began to change. Colleen started observing problems with her balance and walking gait. Soon after, she was experiencing issues with slurred speech. Over the next few years, she visited a series of neurologists, offering a slightly different diagnosis. Colleen invested a lot of time researching the underlying causes. She tried various diets and nutritional supplements, which helped, but her condition continued to progress.

In 2007 she received a referral to the Mayo Clinic. The neurologist at Mayo offered a definitive diagnosis of Spinocerebellar Ataxia. He did not discuss treatment options; instead, he focused on accepting this new life and suggesting ways of enjoying it.

Learning To Live Our New Life


Spinocerebellar Ataxia is a progressive neurological disease that is an atrophying of the Cerebellum. There is no cure, and the treatment options are limited. The disease affects motor function, speech, and swallowing. There are over 40 types with different causes and challenges. In Colleen's case, it is hereditary. Today Colleen is non-verbal and non-ambulatory. Thankfully this condition does not affect her mental capacity. Colleen is as sharp today as the day we met.

By the time we visited Mayo, Colleen had a strong suspicion of her pending diagnosis. She had an idea of the challenges she would be facing. Her father and brother had the same disease. She witnessed their progression before their passing. Before visiting Mayo, there was a sliver of hope she had a condition that could be treated. That hope vanished with her diagnosis of Spinocerebellar Ataxia. Our old life was soon to be a memory. We had to find a new way to live.

By November of 2017, Colleen's condition had progressed to a point where it was time to retire from her career at the University of Wisconsin Extension. Around this time, I accepted a new role with my employer. This new role allowed me to work from home and care for Colleen. Although everything was in place to help us adapt to this life, something was missing. Over the next six months, we were led to the idea of making a monumental change in our lives. We tossed, sold, or donated nearly everything we owned. We bought a truck and accessible travel trailer and were off to explore the country. Over the next three and a half years, we hit thirty-seven states logging fifteen thousand miles.


Our journey started in Mesa, Arizona, where our travel trailer was built.

It did not take long for us to realize Colleen's current wheelchair limited our access to the natural world. In June of 2019, I found the GRIT Freedom Chair online. I reached out to the team, who helped answer all my questions and guide me with the necessary measurements. The push version seemed to fit our lifestyle best. Shortly after, I received a follow-up call, and we placed our order.

We took delivery of our chair when we arrived in Madison, Wisconsin. We took it for its first run on the bike path behind the campground the following day. I was blown away by how smooth it rolled. I could effortlessly push the chair with one hand and walk our dogs with the other. The possibilities to explore the natural world grew by leaps and bounds that day.

Our GRIT Freedom Chair allowed us to access beautiful gorges in New Hampshire and roll along the shores of the Atlantic. In California, we meandered the trails of Sequoia National Forest, admiring the grandeur of these giants. We took sunset strolls along the beaches of the Oregon coast, marveling at the marine life. We explored rocky trails, sandy beaches, and wooded forests from coast to coast. We were fully immersed in nature once again.

Since we were living out of our travel trailer, space was tight. We did not have the option of hauling around multiple chairs. Our GRIT Freedom Chair not only served as an outdoor travel chair but also as our everyday chair. We originally had concerns about the maneuverability of getting around indoors, but this was a non-issue. The chair was equally effective in a coffee shop, a beach, or a trail.

Reflecting on This Journey

After Colleen's diagnosis, we had little idea of how to adapt to our new life. As Colleen's condition progressed, we had to relearn every aspect of our daily routine. We thought we were sentenced to live a minimal life. A new world opened up to us thanks to the capabilities of our GRIT Freedom Chair.

This journey has been an arduous one. There have been numerous times we have felt like giving up. We did indeed press on. Today we are enjoying life to the fullest. Hellen Keller said, "The struggle of life is one of our greatest blessings. It makes us patient, sensitive, and Godlike. It teaches us that although the world is full of suffering, it is also full of the overcoming of it." 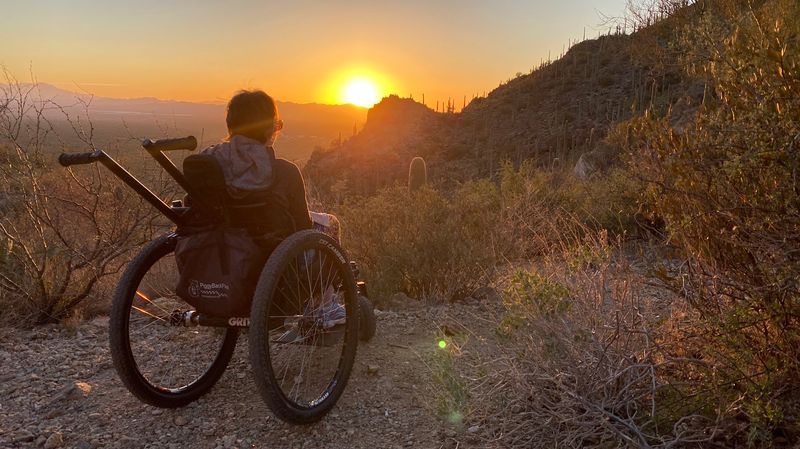