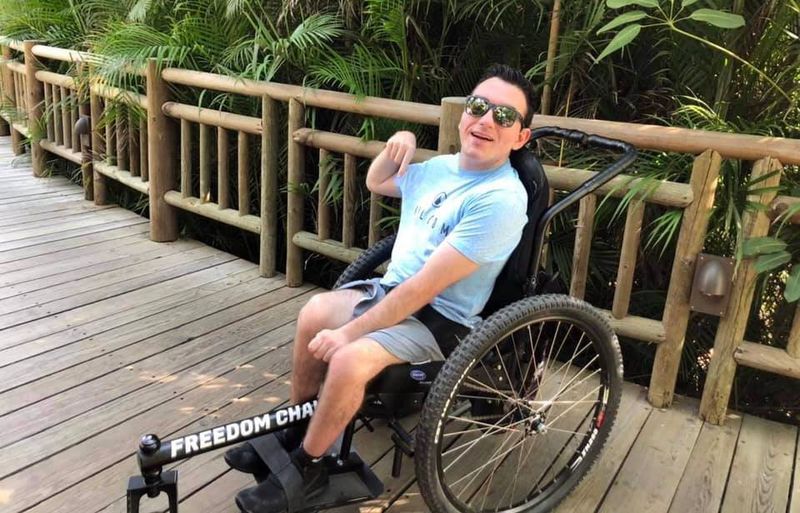 When two mud-covered military veterans finished their Spartan Race and saw Trandon watching from the sidelines, they turned and headed toward him. One wore a chest patch that read “Granville” and carried a cinder block wrapped in heavy chain. The other, “Lopez,” removed the Spartan finisher medal from around his neck and handed it to Trandon. “Keep this,” Lopez told him, “but I want you to do a Spartan Race with us.”

Trandon and his mother, Angie, could barely believe the request. After almost eighteen years of going only as far as his electric chair could go, or only as far as he could be carried, Trandon looked at the winding path beyond the Spartan starting line and thought, I don’t know if this is possible.

Three years later, Trandon Mechling has since completed multiple Spartan Races around the country, has traveled to Hawaii and Mexico and Australia, and is now a Global Ambassador for LIMBitless. Saying Trandon has “overcome obstacles” understates his commitment to personal growth. He, Angie, and the community around them now focus on helping other athletes find their stride.

The GRIT team was lucky enough to sit down with Trandon and Angie to hear some of their story. Now, we have the privilege of sharing it with you. 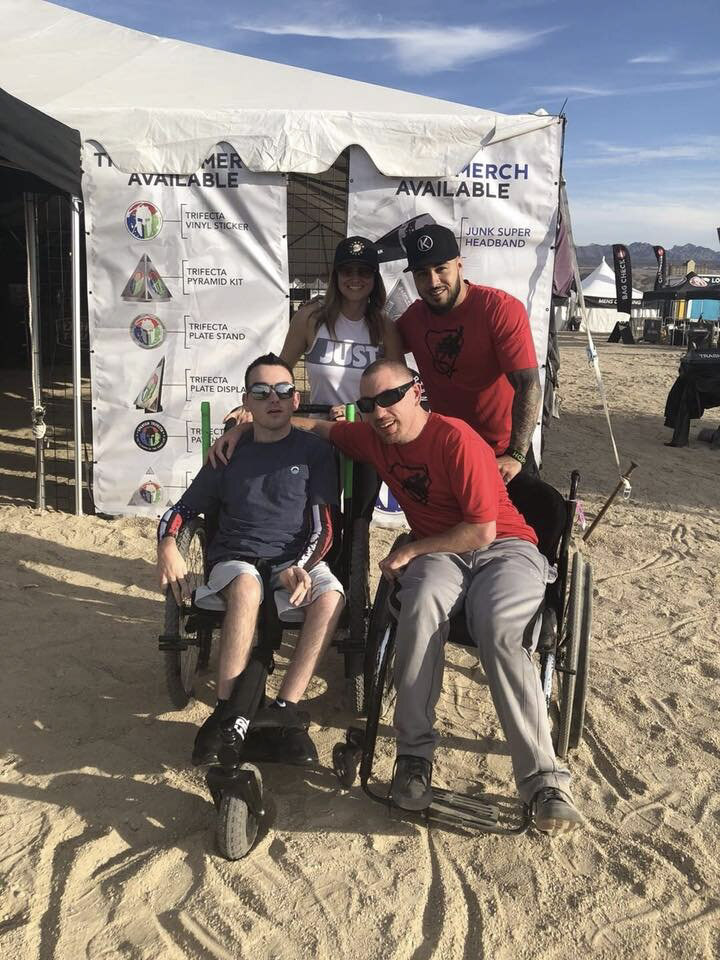 The Road to Spartan

If you don’t know Trandon’s parents, Angie and Leonard, let us start by saying: They are tremendously active people. We’re not kidding. From downhill skiing, camping, boating, big-mountain-summiting, to more hard-hitting obstacle courses than we can even count, Angie and Leonard put in work. When their son, Trandon, was diagnosed with cerebral palsy, the three of them were introduced to a different kind of test.

Angie and Leonard wanted to share with Trandon their love for outdoor adventure in as many ways as possible. On family vacations to Redfish Lake, Idaho, they’d drive Trandon’s power chair down to the edge of the sand and then carry him the rest of the way, so he could enjoy the water. As parents, they looked at the many trails and hikes near their home and told each other, “It would be so awesome to do something like that with Trandon.”

But it was tough, especially on Trandon. After graduating high school, he struggled to sleep, to stay active, and to find motivation to communicate much at all. Angie and Leonard sought professional help, and still, Trandon felt in many ways, stuck. 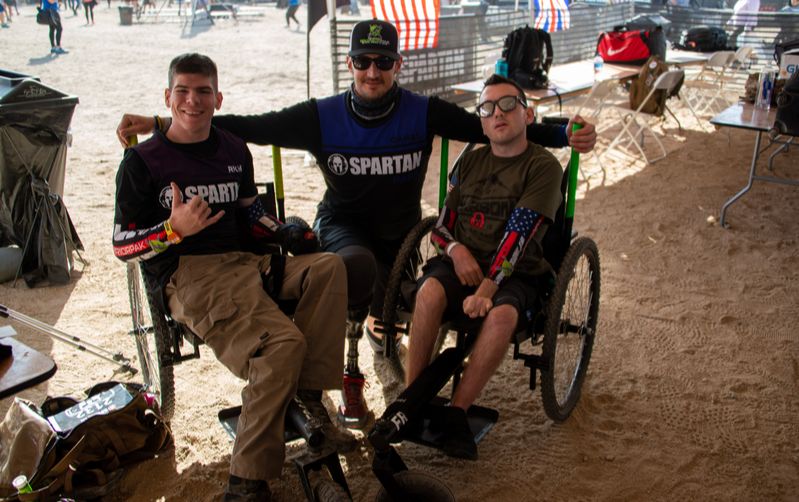 ESPN? It Can Wait.

This was all until Angie and Leonard—both avid Spartan racers—decided to bring Trandon with them to the Spartan World Championship in Olympic Valley, California. Leonard headed to the starting line, while Angie, Trandon, and a family friend stayed in the spectator area, where the power chair was able to roll.

Angie left to buy tickets for the gondola, which would at least give them a chance to see the obstacle course from above. When she came back from the ticketing booth, Trandon was talking with the two veterans, Earl Granville and Jonathan Lopez. They had raced the course with  Operation Enduring Warrior and decided they weren’t going to walk past Trandon without shaking his hand and starting a conversation.

As they spoke with Trandon, a  Spartan official hundreds of feet away yelled in their direction, “Lopez! Earl! Get over here! You’re late for your interview with ESPN!” 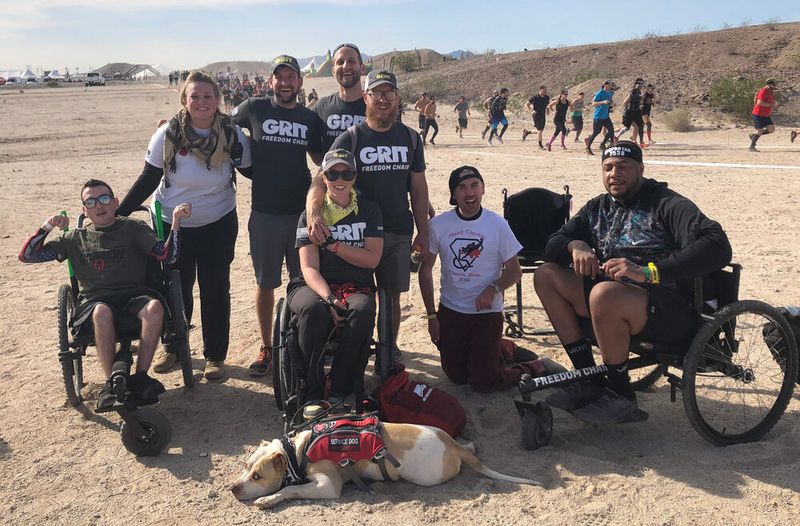 Trandon (left), Erica Walker, some of the GRIT Freedom Chair team, James Norris, and Dwayne Morgan at a Spartan Race in Laughlin, Nevada.


Granville and Lopez all but ignored the official (who happened to be Erica “eWalk” Walker, the powerhouse behind  Spartan PARA) to finish their conversation with Trandon. The staff of ESPN waited, cameras in hand, somewhere off in the distance. Lopez looked Trandon in the eyes and said, “We have a chair you can use. Let’s race soon. Please get in contact with us.”

“I was nervous as heck,” says Angie. She didn’t know these two guys, and everything happened so quickly. She honestly wasn’t sure they, or any wheelchair, would be able to help Trandon through a Spartan Race. But, when they returned home, the family and Trandon’s trainer discussed the possibility of actually going for it. The trainer told them, “What do you have to lose?” I mean, maybe it would help. Who knows?”

So they went for it. A few weeks later, they met up with Lopez at a Spartan Race near Las Vegas, and, sitting in the all-terrain wheelchair Lopez had mentioned, a  GRIT Freedom Chair, Trandon made his way toward the starting line for the first time in his life.

Angie shares,“The community has helped him so much. Just meeting Jonathan, Earl, and then Tyler Rich, and James Norris, and Kacey McCallister, and Dave Ganas, there are so many amazing athletes that Trandon gets to talk to. He gets to see there’s other people out there like him, still living their life.”

“I didn’t know what they were going to take me to do,” Trandon says. “I didn’t know if it was going to be safe, or what. It is a different experience with people like me.”

But he did it. Trandon, flanked by members of Operation Enduring Warrior, completed the many-mile, obstacle-studded Spartan Race. After he completed the fire jump and crossed the finish line, Trandon received another Spartan finisher medal. Trandon knew it looked similar to the one Lopez had given him weeks earlier, but with the Spartan course now behind him, this medal was quite a bit different. 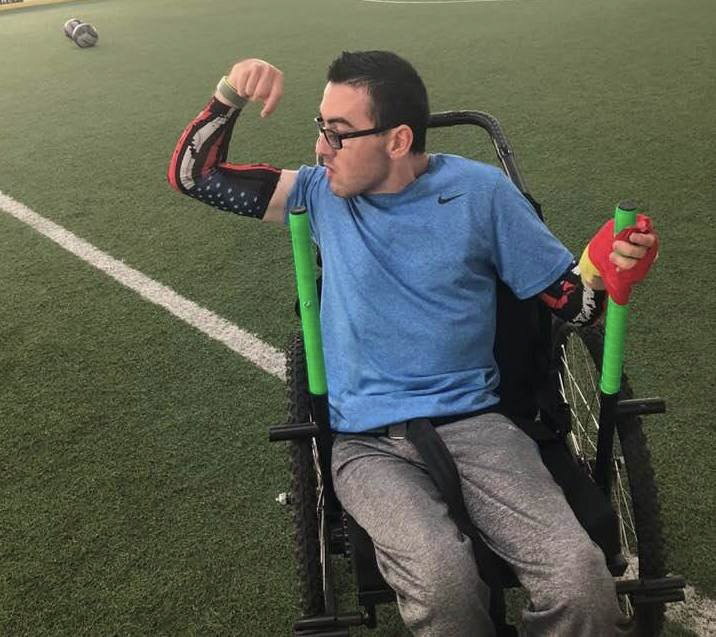 Trandon, who once had to settle for spectator tickets, shown here offering tickets to something far better: The gun show.

Equipping for a New Adventure

Soon afterward, Angie was on the phone with GRIT, telling the team, “We’ve got to get this chair ordered for Trandon.”  GRIT helped them spec out the model, size, and accessory package that was best for Trandon, and our production team got to work.

Angie now says, “I got the GRIT Freedom Chair for Trandon and it has literally changed his life. From where he was to where he is now, he's not even the same. He has just gone forward.”

“We got him the GRIT Freedom Chair and his trainer started working with him. Trandon’s left arm kind of does its own thing. This trainer has it re-trained so that he can actually bring it back and forth and do the pump on the left. We tape his hand to the handle. But it works, to do that. Before, he could hardly get any motion out of that arm. So the GRIT Freedom Chair has been life changing. It is helping Trandon exercise. I’m thinking that it’s really going to help improve his bone density and making his femurs and his legs stronger...I don’t think the average person even realizes all the benefits of the chair. I mean, he’s getting so much exercise. He’s getting a workout with his heart, his arms. He’s out in the community.”

With Trandon’s new chair, his new perspective on the “impossible,” and—more important than anything—his new friends at OEW, Spartan, and the adaptive sports community as a whole, he went on to complete three more Spartan Races in close succession. 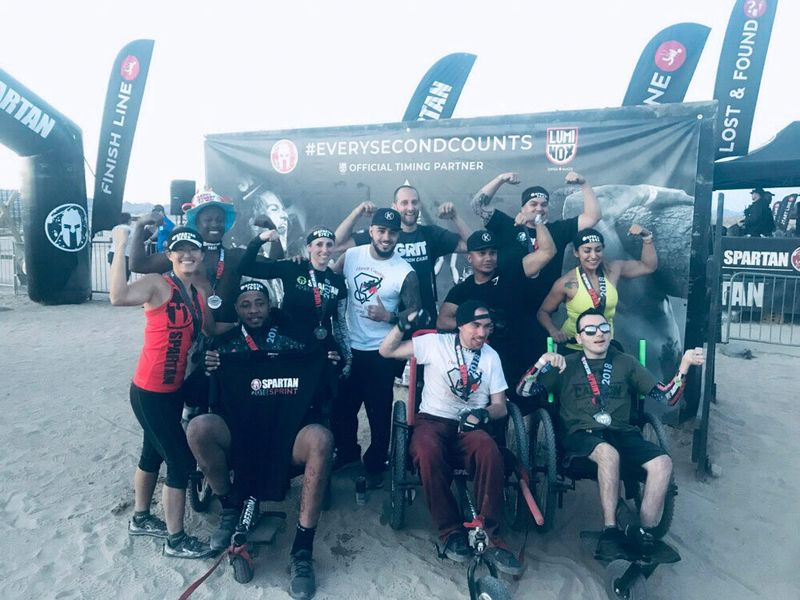 Beyond the Pavement…and the Finish Line

As a family, the Mechlings have been able to expand the activities they can do together. Angie says, “Leonard and I obviously trail run a lot, so we've started taking Trandon out to go trail running. And that's so awesome for family time, just getting him out and being out on the trails together as a family.”

They have also visited the Grand Tetons and have explored the  hikes they’ve long wanted to share with Trandon. The family traveled together, with their GRIT Freedom Chair, to Hawaii and Las Vegas. Angie adds, “We took his GRIT chair to Mexico and I'll tell you what, it was awesome. The whole time, we were so happy, we were all just like, this is so awesome that we have this.” 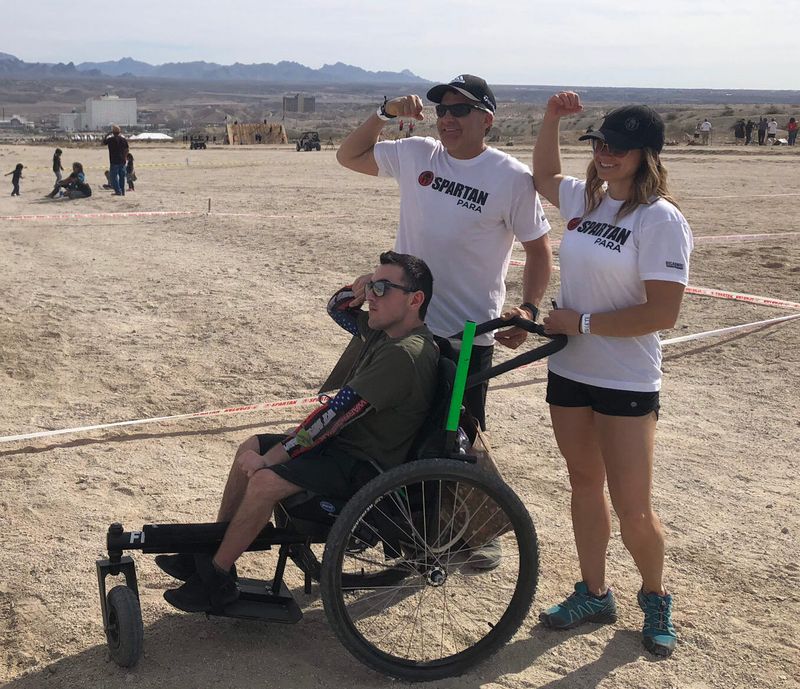 Trandon and his parents, Leonard and Angie, at the 2018 Para Spartan World Championships.

While once skeptical about obstacle course races, about the all-terrain GRIT Freedom Chair, and about his own athletic career, Trandon now finds himself on the other side of the conversation. People, especially others with  cerebral palsy, now often approach him and ask how he stays so active.

Trandon replies: “A lot of people think, ‘Oh my kid can't physically do that workout.’ Well, anybody can do that. You can adapt to anything.” 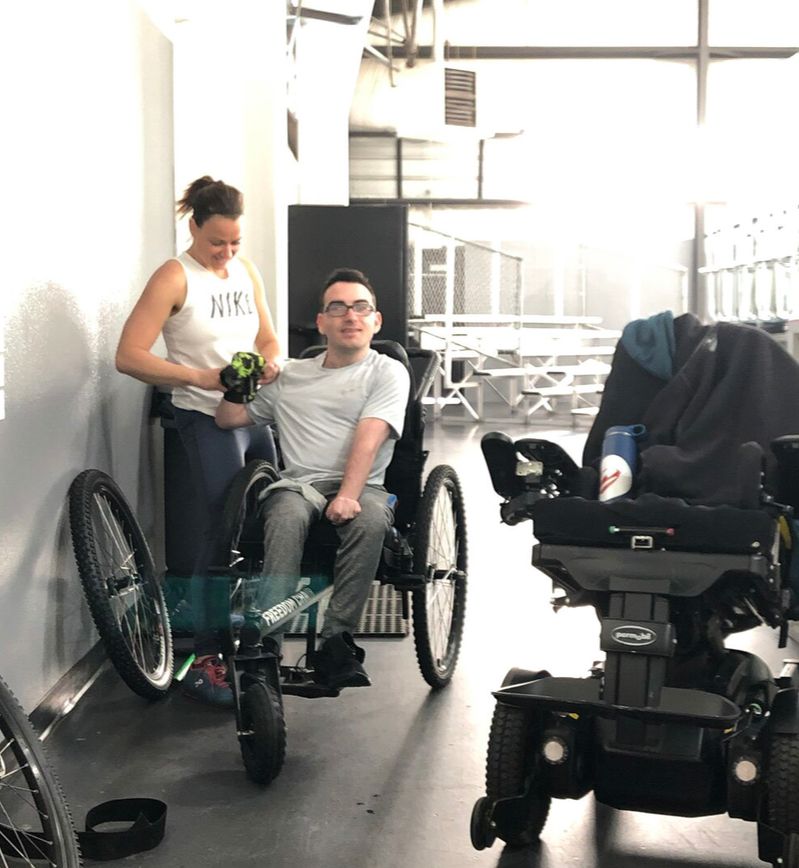 Want to talk to Trandon and other GRIT Freedom Chair riders? Join the  Beyond the Pavement Facebook Group!